You are currently in: HomeHighlightsCoax75 Ohm Components for HDTV – Series BNC und F
infostream
Subscribe to our Newsletter
Core Products 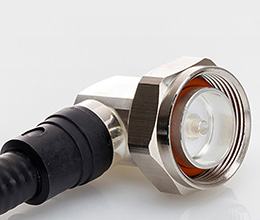 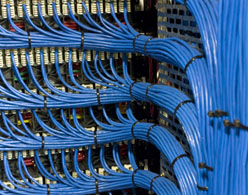 High Definition Television (HDTV) digital technology makes high demands on the components involved. The improved picture quality requires a much greater data volume. In order to transmit this volume with minimum losses, high quality 75 Ohm BNC and F connectors, as well as special cables, designed as accurately as possible with regard to impedance-matching, have been developed for radio and studio applications.

The so-called High Definition Television (HDTV) places far higher electrical demands on the 75 Ohm BNC- and F-connectors commonly used, in order to improve the system Return Loss performance and, therefore, the signal reflection, up to a frequency of 3 GHz.
For this reason, Teleg채rtner has specially developed a new series of 75 Ohm BNC- and F-connectors with extremely high impedance matching, resulting in excellent Return Loss values (typically -30 dB min up to 3 GHz). Unlike standard F-connectors, all the Teleg채rtner designs include a centre contact.

Where high quality 75 Ohm cables are concerned, the greatest challenge lies especially on the production front. Here, it is imperative to ensure as accurately as possible the interaction of wire pre-heating, nitrogen and material feed, temperature control, speed control of the extruder, as well as control of the unwinding and winding. High uniformity of the line speed and compliance with a defined cooling process is important to keep production tolerances as low as possible. In addition, the prevention of vibration of the inner conductor being fed into the extruder is vital. When all of these parameters are observed, an impedance accuracy of 75 Ohm < +1% can be achieved.

Since the 30th of April 2012, analogue satellite TV has been history in Germany, and digital TV (Digital Video Broadcasting) has entered out living rooms. DVB can be received via cable (DVB-C), satellite (DVB-S) and terrestrial antennae (DVB-T). This changeover has brought us improved picture quality which is more than apparent in HDTV (High Definition TeleVision) broadcasts. These HD broadcasts have at least 720 picture lines, whereas PAL (Phase-Alternation-Line) only has 576 picture lines (analogue/digital). But the data volume that has to be transmitted within a certain time also increases with the higher picture quality. The data rate for HDTV can be up to 25 Mbit/s per channel, whilst normal PAL data rates are 4 or 6 Mbit/s per channel.
The high quality 75 Ohm BNC and F-connectors, as well as cables, specially developed for radio and studio applications, have been designed to match the impedance as accurately as possible, and therefore enable transmission of such large data volumes with minimum losses.

These HDTV-compatible components must ensure very good attenuation values up to approx. 3 GHz, in order to keep picture interferences due to signal reflections as low as possible. It is, therefore, essential that the impedance-matching of the connectors with the respective cables is at its best.

Corporation
Coax Connector
Download and Tools
Products
Trade Fairs
Networking components
Information Material
The company is now one of the top addresses for coaxial connectors, network components, high-precision turned parts, plastic injection mouldings, industrial electronics and cable assembly. But this remarkable development was only possible because the demands of the traditional company have not changed in all these years:"Teleg채rtner does not just want good quality. Teleg채rtner wants to be better and supply our customers with excellent solutions with which they can work successfully."